**See the bottom of this post for a short tutorial on how to "football fold" a grocery bag. This tutorial is intended for personal use only.**

I like to reuse the plastic grocery bags that I get from the supermarket. There are times that I have so many that I end up with terrible storage issues. Years ago I had them stuffed into a couple of tubular fabric grocery bag holders until they both broke. I never really liked those holders because they do nothing to reduce bulk. Since then, I have been stuffing them into other grocery bags as you can see in the photo below. This method is the absolute worst and is extremely bulky. 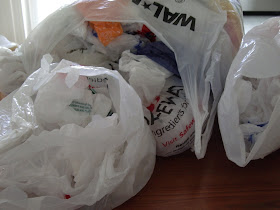 Yesterday, I decided to try and fold the bags into the smallest, flattest pieces possible. After fiddling around a bit, I resorted to the only fold that I know that is compact and stays together without coming undone.

My hubby played finger football as a child and he taught us this fold. He would take a strip of paper and fold it into a "football" and play a game of finger football with his friends. This game also kept our son entertained for hours when he was a little boy.

I spent some time in front of the television folding these bags into little triangles and tossed them into a laundry basket for the time being. When my son returned home from classes, the first thing that he said when he saw them was, "Footballs! What are you going to do with all those footballs?" I had to laugh because he's 21 years old now and he still recognizes these triangles as footballs.

There are ninety-seven plastic grocery bags in this pile. As you can see, this has tremendously reduced the bulk. 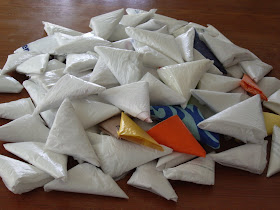 Of course, once I had these folded and reduced in size, I had to come up with a suitable storage container that would be non-bulky and allow us easy access at the same time. As you can see, my grocery bag holder is modeled after a peg or clothespin bag. I am calling this design, Grandmother's Apron, just because it reminds me of one. 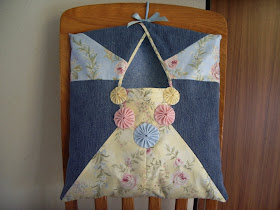 All ninety-seven "footballs" fit nicely in the Grandmother's Apron Carryall with room to spare. Mission accomplished!!

On another note...Mousie sends smoochies to all of his Aunties that sent him virtual hugs and kisses! He's feeling much better today and will soon be back to his favorite activities like hiding in cardboard boxes and shredding them to bits and pieces!

I would like to thank you all for your wonderful comments and emails of caring and support. You have all been so kind and it has meant the world to me that you care. We're hoping that it is what we all suspected, constipation! My heartfelt thanks goes out to you all! 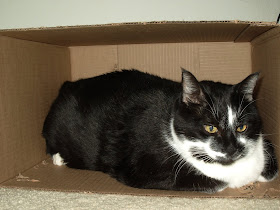 Have a happy day, everyone! 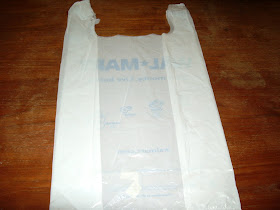 Fold in half lengthwise. 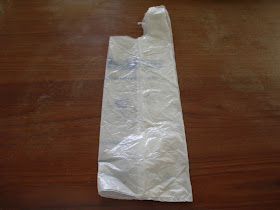 Fold in half again. 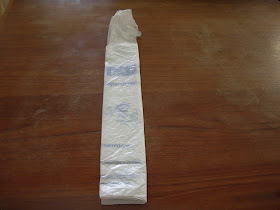 Start at the bottom end of the bag. Fold up one corner. If the folded portion looks like a triangle, you're on the right track. 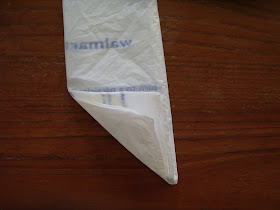 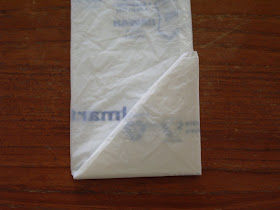 ...until you've reached the handle. 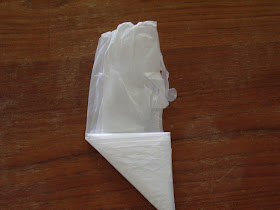 Fold the handle in half. It may require more than 1 fold depending on the length of the handle. The handle should end up being about an inch long. 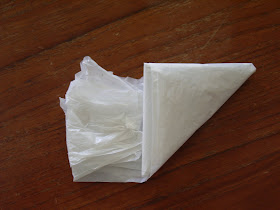 Fold up one corner (the side that is slanted). 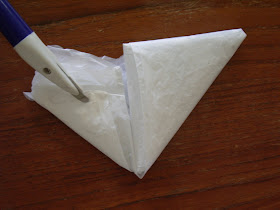 Tuck the handle into the opening in the triangle. 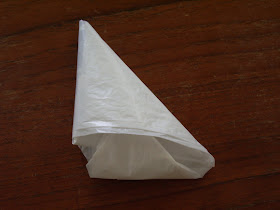 Flatten with your hand. All done!! 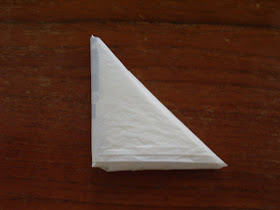